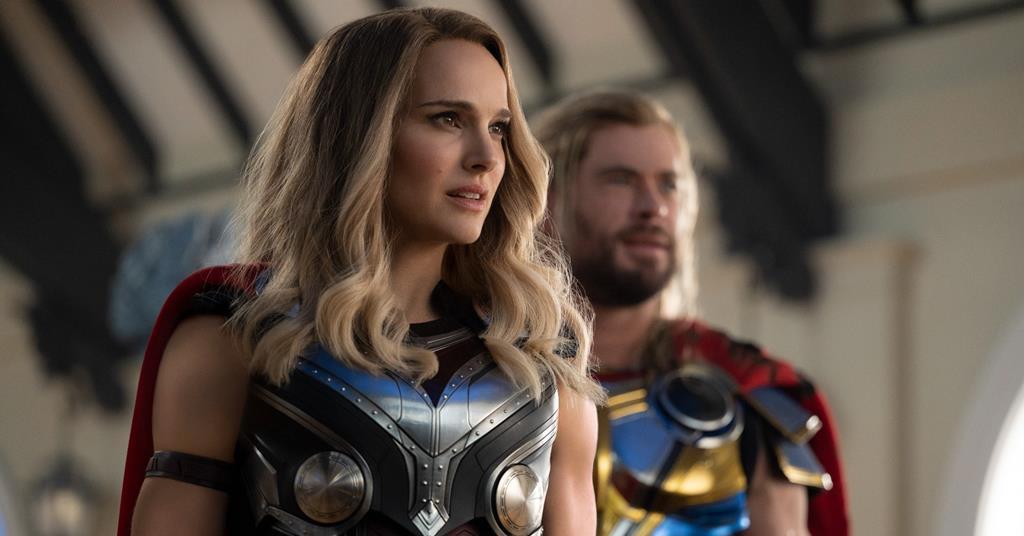 Another month, another Marvel movie topped the box office. In the past twelve months alone, the Marvel Cinematic Universe (MCU) has produced five movies and five TV series; if you don’t follow, no one will blame you.

Superhero fatigue seems to be setting in, even though people still come in droves to watch these movies. And yet, many of these screen-filling blockbusters remain curiously devoid of meaning or substance. I’ve said before that they’re like the McDonalds of the movies – sometimes you want it because you know exactly what you’re going to get, but you’re never really satisfied.

The last is Thor: Love and Thunderalthough they really missed a trick by not calling him Thor 4: More Thor. It’s much more the same, Marvel being Marvel. It’s funny, fast and forgettable.

What sets this one apart, and worthy of a chronicle here, is that it is almost theological. It’s a plot that almost seems to have something to say about God – or, at the very least, the gods.

The film opens with a tattooed man praying for relief as his daughter dies in the desert. He then encounters his personal deity, who laughs at his distress and claims he can always find other worshippers. The tattooed man quickly kills him with a god-killing sword and swears to kill all the other gods. The film’s villain, Gorr the Butcher God, is born.

if the gods are like that, do they deserve to die?

If that already sounds too heretical to take your kids on, maybe it is. But think of it this way: it’s pretty much the same as reading Greek myths to them. The gods of ancient lore were cruel and self-obsessed, making them unworthy of worship but cute characters when it comes to storytelling. This could be a great opportunity to talk about what makes the God we worship different, how he stepped in, and how he never stopped caring about his people.

Either way, Thor soon finds out about this god-butcher and sets off on a quest to stop him. Meanwhile, the love of his life, Jane, is dying of cancer and now also has superpowers. Thor wants to save her, while preventing Gorr from going on a rampage. Their journey takes them to the shining realm of Omnipotence City, home to gods of all cultures. Zeus is there, played with comedic exaggeration by Russell Crowe, along with an array of gods from Mayan, Carthaginian, alien and other cultures. There is even a passing reference to a “carpenter god”. When Thor arrives, he finds them as conceited and indifferent as Gorr’s.

We begin to wonder if the villain is right; if the gods are like that, do they deserve to die?

Little attention is given to the ramifications of this pantheon of deities hanging around an uninterrupted city. The MCU now has a Jewish hero – Moon Knight (who is also possessed by an Egyptian god, that’s a long story) – and a Muslim – Ms. Marvel. Captain America was presumably a Christian, while Black Panther visited an afterlife called The Ancestral Plane.

Do these gods and these theologies coexist? Who do Ms. Marvel’s prayers go to? Thor: Love and Thunder is not very interested in answering this question. These gods are not designed to be followed or worshiped – instead, greater importance is given to “found family”, or the people you choose to bring into your life. According to the MCU, they are the highest calling.

Frustratingly, none of the vague attempts at theology or philosophy seem to mean anything. Ostensibly, love and thunder is a film about trying to beat death in the face of an indifferent universe, but it explores these themes with all the depth and impact of a Saturday morning cartoon (no disrespect to SpongeBob SquarePants).

One character, Jane, is a human, but in doing so she discovers that the gods of many cultures exist and that they are largely terrible. Such a revelation would shatter any human’s view of the world and yet, in five minutes, it’s back to the banter and the fights. I can’t get bogged down in something like themes when there are jokes to be told and scenes to be shown. Meaning and depth are sacrificed on the altar of plot. The MCU, and by extension this movie, is about “what happens next” rather than “why is it happening.” Marvel isn’t trying to make a statement with its cruel and insensitive gods. They just needed a plot device.

So what? You could say. It’s just a superhero movie after all. Use it for jokes and action sequences. It’s definitely possible, I had a great time watching it. I particularly appreciated a sequence on a planet without color, demonstrating a certain visual invention. It’s notable for making me feel like the characters were in danger. I even found the ending quite sweet. So yes, have fun with it Love and Thunder.

But I can’t help but want more of the most successful film franchise of all time and the movies that dominate our screens several times a year. The casualness with which the MCU deals with important ideas such as death, belief, and meaning will have a numbing effect on audiences. And they’re doing it all in the name of keeping the franchise going. This is a film that reveals the existence of several gods, kills some of them, then shrugs it off. Perhaps we should ask more of the art we consume than an existential shrug.

Wondering if your kids should watch this movie? Read the Premier NexGen review here