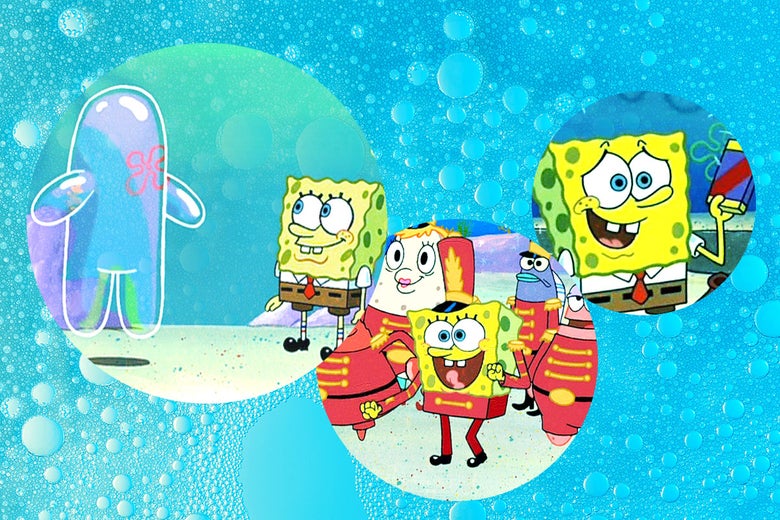 The best episodes of SpongeBob SquarePants, in honor of the death of Stephen Hillenburg.

Online, news of Stephen Hillenburg’s death was met with Sponge Bob SquarePants creepy memes and quotes from his most famous creation. (“Today, mayonnaise is an instrument. In the offices of Slate, he was greeted with equal sadness and nostalgia, especially in a particular age bracket. Spongebob has been on the air since 1999, which means Hillenburg’s underwater anthropomorphic comedy has left its mark on countless young viewers, many of whom are now grown up. Slate recruited its team of young millennials, many of whom watched Spongebob at the end of the 90s and the beginning of the 2000s, to identify the most essential episodes of this first period and to articulate what it is about Spongebob that’s been going on for so long. Here are their picks.

“Band Geeks” is one of those perfect episodes of TV that lingers long past your first or fifth or 75and viewing, especially because it made me discover the absolute banger that is “Sweet Victory” by David Glen Eisley. I’m not going to say that the episode alone convinced me to join a marching band, but I will say that I was deeply disappointed when I realized that we didn’t have an electric guitar in the ranks. “Band Geeks” represents so much what made Sponge Bob SquarePants iconic: storylines that got you hooked in minutes, an unexpected catchy bop, and humor that didn’t cost anyone else. It’s to SpongeBob’s and Stephen Hillenburg’s credit that despite my parents’ general disgust at all the programming my brothers and I watched, they still can’t help but hum “Sweet Victory” every time. that it occurs. —Rachelle Hampton

“Sailor Mouth” has been my favorite SpongeBob episode for 15 years. For the uninitiated, this is the episode where SpongeBob and Patrick learn to swear by reading graffiti written on the back of a dumpster. Their first encounter with “salty language” thrills them, and the audience has to guess what they are saying as the word is censored by a dolphin cry.

The day after I first saw the episode, I was narrating it for a friend at lunch and trying to impersonate Spongebob’s voice, to no avail. But I realized I had the perfect squeal/squeal in my teenage voice to nail the dolphin sound. The kids at my lunch table laughed so hard and for three minutes I felt relieved to make people laugh because I did something funny and not because I embarrassed myself. My voice has obviously changed since fifth grade, so I can’t make the dolphin noise as much as I used to, but every once in a while I’ll search YouTube for “Sailor Mouth” just to relive that moment. —Aria Velazquez

There are ridiculous lines of Spongebob dialogue that will stick in my brain forever, eliciting almost Pavlovian responses from many millennials. “Chocolate With Nuts” belongs in the canon of quotable episodes for many reasons, but one rises, loudly, above the rest. Do “CHOCOLATE!!!!!!!!” Does this ring a bell ? —Danielle Hewitt

I don’t know if I’ve ever seen Spongebob the improbable physicality of the characters better exploited than in “Graveyard Shift”. Repulsive yet absorbing moments abound: when SpongeBob bites his nails to the point that he repeatedly engulfs and regrows his arms; when his pupils form mouths and begin to scream; when Squidward’s non-existent hair suddenly grows out, individual locks twitch in a moment of ultimate dread. This episode’s dialogue is also brilliant throughout the Hash-Slinging Slasher’s story (“Then he got hit by a bus! And then, at his funeral…they fired him ! ”) to Spongebob Finding Joy in Work”at night(providing me with a sly verbal complement that I still often use in embarrassing ways).

In less than 10 minutes, “Graveyard Shift” incorporates the most surreal elements of the Sponge Bob SquarePants universes to bizarre extremes and blends them seamlessly. Name another TV show that could make an arbitrary cut out Nosferatu cameo work so well. —Nitish Pahwa

One of my strongest memories from the pre-streaming era is watching “Krusty Krab Training Video” and waiting, desperately and without any concept of TV programming, for Nickelodeon to air it again. Told entirely as an employee welcome movie, “Krusty Krab Training Video” was, I think, the first groundbreaking sitcom episode I’ve ever seen. This segment, and many others Spongebob episodes, taught me to love weird comedy. It also taught me the timeless wisdom of POOP (People Order Our Patties). —Madeleine Kaplan

An episode about Plankton trying to steal a Krabby Patty would be pretty standard fare if it weren’t for the instantly classic “FUN Song.” While trying to befriend Plankton, SpongeBob is forced to explain fun, a slippery concept that’s hard to define, so he sings a cheerful little acrostic that comes closer to sentiment than any dry definition. Every time I hear the word, I can’t help but mentally line up to the opening line, “F is for friends who do stuff together…”

The best Spongebob episodes live in that space between what adults enjoy and what kids enjoy. “FUN Song” is a perfect example of this: it takes the default setting of SpongeBob’s shamelessly innocent optimism while offering a playful analysis of something we all experience but struggle to articulate. —Daniel Schröder

In this episode, Plankton makes a wish and switches lives with Mr. Krabs, with the kind of results you’d expect. This is one of the best “SpongeBob is for kids, but SpongeBob is for adults” episodes, in my opinion, because it reads like a completely different episode depending on your age. The kids spend the episode marveling at Plankton’s inability to emulate the life of Mr. Krabs, while learning about some of the truly crazy minutiae of his time. Adults wonder how badly it could go before the problem of the week is solved. This is the episode that made me realize that anime series can also be for adults, without being salacious or explicit. (But don’t talk to me about “Mid-Life Crustacean”.) –Dawn Price

I think of “Bubble Buddy” more than any other Spongebob episode. It’s funny, but not the funniest they’ve done. It’s not a “Band Geek”. It still makes me laugh, 18 years later, at “Happy Leif Erikson Day!” Hinga Dinga Dergen”, and for much the same reasons. But “Bubble Buddy” is still on my mind because he taught me some heavy stuff when I was young.

When I think of “Bubble Buddy,” I see myself as a child learning to contextualize the actions of others around the emotions that got them there. Some people in the episode only wanted Bubble Buddy to appear because he had them waiting in a long line for the bathroom. If that happened to me in a bar, of course, I’d be quite irritated, but I remember being appalled at what they wanted to take away from SpongeBob just because they had to hold him longer than they didn’t want it. SpongeBob really only has two friends, and he was lonely enough to come up with things to do and someone to do things with. These fish didn’t know it, but it made me think twice about what was going on behind the scenes with people doing stuff that pissed me off. Always does. —Taylor Palmer

When I was in elementary school, there was a kid in my class—we’ll call him “Dave”—who recited entire episodes of Spongebob word for word. Some kids made fun of him for that, but I remember always being secretly impressed. One of his favorites was “The Wet Painters,” a masterclass in comic climbing as SpongeBob and Patrick struggle to paint Mr. Krabs’ house. He even nailed all the accents. I’m willing to bet wherever Dave is now, he still knows every line. —Marissa Martinelli