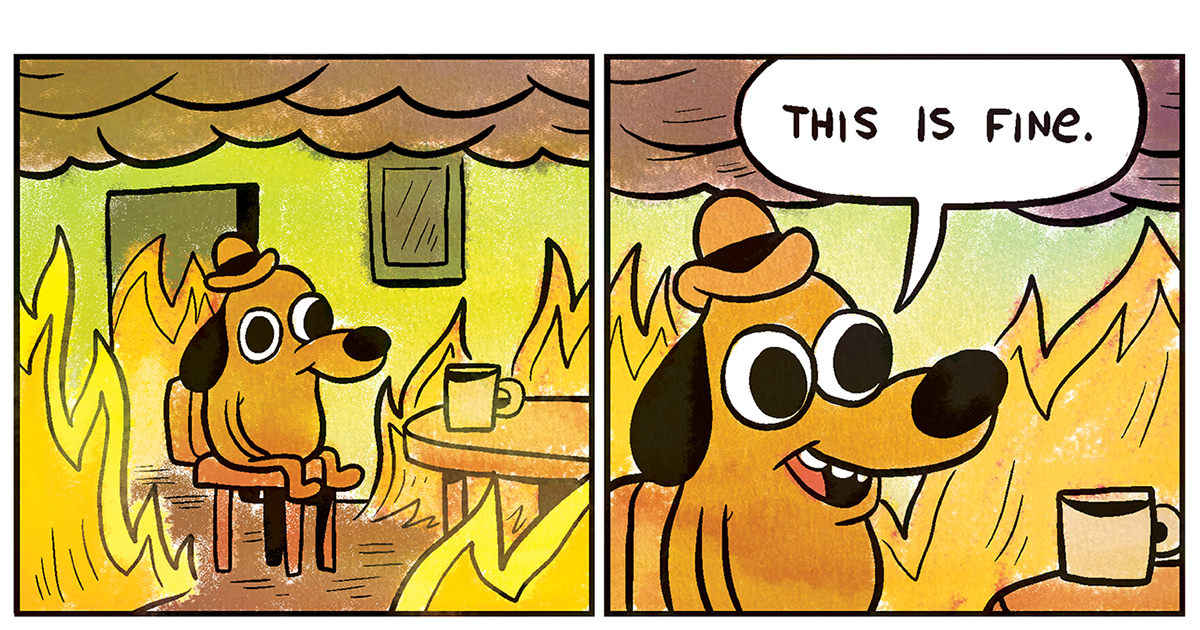 That’s good: the artist behind the meme

WAs wildfires devastated the West Coast this summer, burning ancient forests to embers and incinerating entire communities off the map, the internet has found ironic solace in a familiar cartoon dog.

A photo captioned ‘Noon in San Francisco’ by @pettycommajared Twitter, which has been shared nearly 30,000 times, featured a plush toy perched like a shredder in the foreground on an apocalyptic horizon of flames. Individuals chronically online would immediately recognize the character as the patron saint of social media misfortune – an anthropomorphic dog sporting a bowler hat and a silly smile, clutching a coffee mug sporting a chorus that bubbles to the top of our timeline in moments of. collective misery: that’s good.

â€œI guess when people feel bad, I take a little advantage of it. I’m not a huge fan to admit that, â€artist KC Green said with a nervous laugh. Since its original publication online in 2013, the Cursed Dog has become one of the most enduring memes on social media, shared to communicate a sense of denial in times of crisis. â€œI guess people are looking for something heartwarming – like, ‘Oh, I’m not alone!’â€ He said.

The two widely shared panels are from a longer strip called “On Fire”, which appears in Green’s former webcomic series “Gunshow”. Across the gang, the smiling puppy quietly drinks coffee inside a burning house before being melted to the skull. “I agree with the events currently unfolding,” the dog assures himself between sips as the flames intensify. “It’s okay. Things will work out.”

Green’s inspiration came from trying to find the right dosage of medication to help him in his continued struggle with depression and anxiety. â€œFor me, it was about my antidepressants, but art is a two-way street,â€ he said. â€œPeople bring whatever they want.

After gaining popularity on Reddit and Imgur in 2014, the two panels quickly became a shortcut for a familiar feeling of carrying on with your daily routine as everything around you felt like it was falling apart. The character himself has no symbolic weight – “It’s fun drawing little animals,” Green said – but the animated dog at the center of “On Fire” represents those times in life we â€‹â€‹don’t want to. admit that things are, in fact, not right.

Signs have come a long way online this year, with mental health issues reaching crisis levels in the face of COVID-19. A new study from the World Health Organization has found that critical mental health services are strained in 93% of countries around the world due to soaring demand from the pandemic.

â€œIt had an emotional impact on everyone, including myself,â€ Green said. â€œIt was more depressing staying indoors all the time and not seeing friends as often as I would like. I sort of manage, that’s how I’ve been doing things since “It’s good”.

Green hopes that those in difficulty can take the concrete steps necessary to improve their mental health. He acknowledges that the denial coping mechanism, while not without its benefits, isn’t a long-term solution – but he’s glad his creation can act as a balm in the meantime.

â€œI want people to feel better. I don’t want people to use it as a crutch, â€he explained. “But at the same time the crutches help, you know?” They help people walk and get around.

Green currently lives in Massachusetts, but developed his love for cartoons while growing up in the Oklahoma City metro area.

â€œIt was pretty boring. I grew up in the suburbs. There wasn’t much to say, which is why I got interested in cartoon illustration, â€he said. â€œI watched a lot of cartoons when I was a kid and I had a vivid imagination with no way out. I started drawing all the time in school and so on, and from there cartoons were my big thing.

Today, the 33-year-old artist is writing a fantasy-western webcomic titled â€œBACKâ€, as well as a serial adaptation of the original children’s story â€œPinnochioâ€ by Carlo Collodi. While he has since completed the “Gunshow” series that gave the internet its greatest coping mechanism, Green recognizes the importance of the two panels he designed in 2013.

â€œReally, it’s humiliating,â€ he said. â€œI didn’t want it to be big or anything. It was just the Wednesday comic.

Yet watching your work become a meme has its own unique set of frustrations.

â€œIt comes and goes in terms of pride or embarrassment of the meme at one point,â€ Green said. â€œThere are times when (someone sends me a version) and I’m like, ‘That’s cool. It looks really interesting. But often it’s just people doing their takes with parodies, drawing themselves in that style like a joke. That’s good and all, but I’ve seen it before.

With the dog “On Fire” more relevant than ever, Green said it was too early to know the extent of the impact his creation had on his life.

â€œI always feel like I’m in the middle of it,â€ he said. â€œMaybe later, when I’m older, I’ll look back and really have an idea. But it’s hard for me to really see the big picture when I’m still in the middle of painting.

But for now? Its good.

Courtesy of The Curbside Chronicle / INSP.ngo

Street Roots is an award-winning weekly publication focusing on economic, environmental and social justice issues. The newspaper is sold in Portland, Oregon, by people who are homeless and / or in extreme poverty as a means of earning a decent income. The Street Roots newspaper operates independently from Street Roots advocacy and is part of the Street Roots organization. Learn more about Street Roots. Support your community newspaper by making a one-time or recurring donation today.