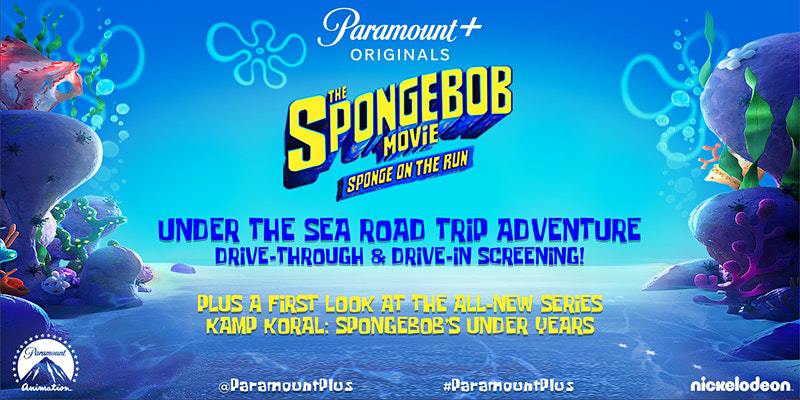 Paramount + invites SoCal SpongeBob fans to a drive-through experience and exclusive screening of the all-new movie “The SpongeBob Movie: Sponge on the Run” on February 27-28, 2021 at the Rose Bowl in Pasadena, California

During this exclusive â€œunder the seaâ€ family road trip, fans of Bikini Bottom in LA will experience a one-of-a-kind immersive adventure through multiple environments with digital interactions and photo moments. The “dive” will be followed by an exclusive screening in a social-distancing vehicle of an episode of the all-new upcoming Paramount + Original series “Kamp Koral: SpongeBob’s Under Years”, followed by the full feature “The SpongeBob Movie: Sponge on the run.

The first six episodes of “Kamp Koral: SpongeBob’s Under Years” will be available to stream exclusively on Paramount + for US subscribers from March 4, 2021.

“The movie SpongeBob: the runaway sponge”

The very first fully CGI SpongeBob movie follows SpongeBob SquarePants, his best friend Patrick, and the rest of the Bikini Bottom gang on their most epic adventure yet. When SpongeBob’s pet snail Gary goes missing, SpongeBob SquarePants and Patrick follow clues that lead them to King Poseidon, who holds Gary captive in the lost city of Atlantic City. On a mission to save Gary, SpongeBob SquarePants and his friends discover that nothing is stronger than the power of friendship. The film features the vocal talent of Tom Kenny, Awkwafina, Matt Berry, Clancy Brown, Rodger Bumpass, Bill Fagerbakke, Carolyn Lawrence, Mr. Lawrence and Reggie Watts.

â€œThe SpongeBob Movie: Sponge on the Runâ€ will be available to stream on Paramount + and will be released by Paramount Home Entertainment for Premium Video-On-Demand on March 4, 2021.

Tickets for the drive-through experience and exclusive drive-through screening are limited and advance tickets are required for entry. All profits will benefit Heal the berry, an environmental non-profit organization dedicated to making the coastal waters and watersheds of Greater Los Angeles safe, healthy and clean.

Check out a preview of “Kamp Koral: SpongeBob’s Under Years” and the trailer for “The SpongeBob Movie: Sponge on the Run:”