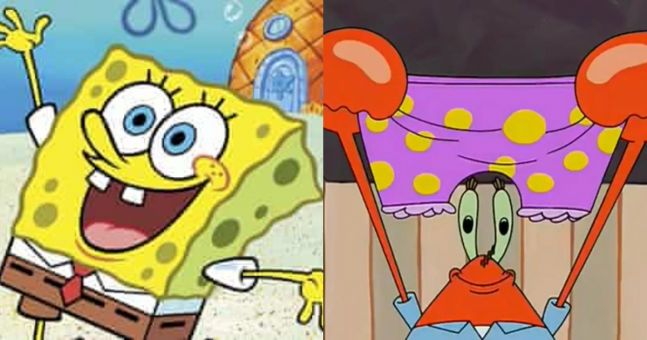 “We determined that some story elements were not suitable for children.”

In another example of a title that only 2021 could produce, episodes of SpongeBob SquarePants were pulled from streaming services due to concerns over their storylines.

The “Mid-Life Crustacean” episode has been “out of rotation” and can no longer be streamed on Paramount+ or purchased on services such as Amazon. The “Kwarantined Krab” episode, which was supposed to air in the current season 12, also appears to have been shelved, though the two were taken down for very different reasons.

Let’s start with the season three episode “Mid-Life Crustacean.” The episode centers on Mr. Krabs having a midlife crisis and SpongeBob’s and Patrick’s attempts to cheer him up. The problematic scene that likely led to the episode being halted in rotation since 2018, is when Patrick suggests a “panty raid”, which leads to the three breaking into M’s mother’s house. Krabs and stealing all of his underwear.

Nickelodeon did not confirm if this scene was the reason for the episode’s disappearance, saying only that the episode “has not been in rotation since 2018, following a standards review in which we determined that some elements of the story were not suitable for children”.

The episode has now also been removed from Amazon Prime.

Now on ‘Kwarantined Krab.’ It looks like this episode was banned from the vault due to its storyline having striking similarities to the current coronavirus pandemic. In a statement to IGN, a Nickelodeon rep said the episode “centers on a virus story, so we’ve decided not to air it due to sensitivities surrounding the actual global pandemic.”

Apparently, the episode involves an outbreak of “clam flu” at the Krusty Krab, resulting in all customers inside being quarantined. The episode ends with a Twilight Zone-like storyline in which all the characters begin to mistrust each other, blaming each other for having the virus and throwing them in the freezer as a result.