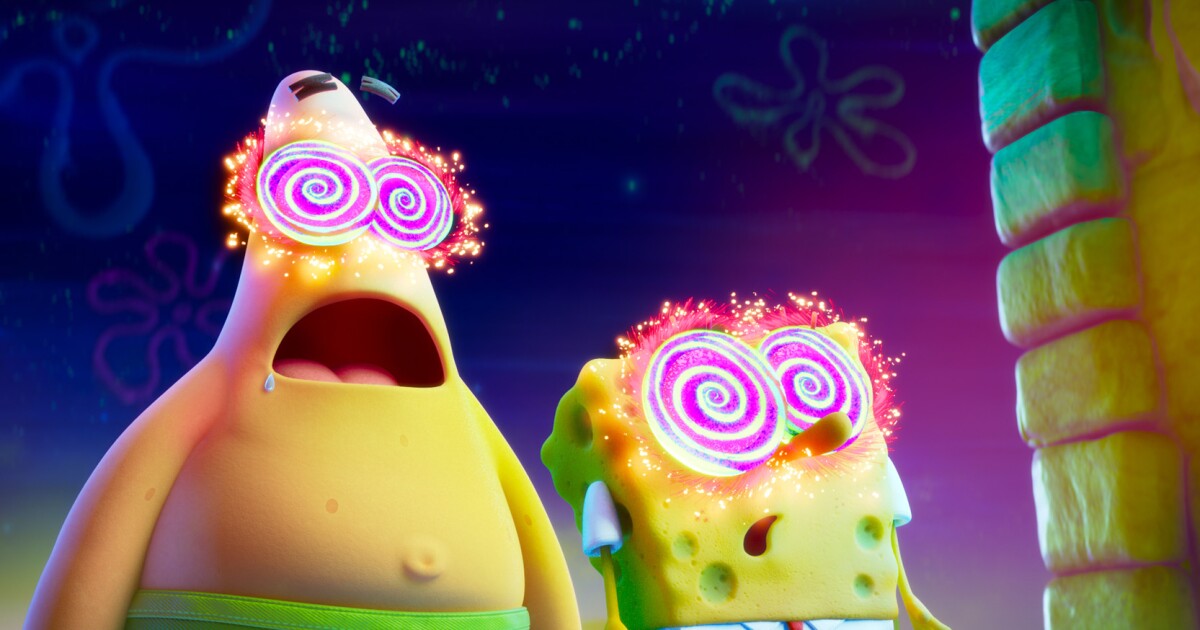 If you somehow missed 13 seasons of “SpongeBob SquarePants” (created by the late Stephen Hillenburg) on ​​Nickelodeon and two previous feature films of this animated nonsense (raise your hand), “The SpongeBob Movie: Sponge on the Run” quickly establishes the beloved characters for the uninitiated. But it’s obviously fans young and old who are the target audience for the franchise’s first fully CGI-animated adventure. However, “Sponge on the Run” serves as a nice entry point into the phenomenon if cultural osmosis hasn’t provided an education for those who know the difference between SpongeBob (voiced by Tom Kenny) and Squidward (Rodger Bumpass). It all makes sense – or at least as much sense as it gets – while being delightful nonsense.

A major plot point in “Sponge on the Run” — yes, there’s some semblance of a story amid the sweet flashbacks, wacky musical numbers, and live-action dream sequences — revolves around the undersea god. Poseidon (Matt Berry) and his desperation for snail mucin to keep his face wrinkle-free. (This acknowledgment of the actual anti-aging powers of the creature’s excretions is the closest thing to science in the film.) Without a K-Beauty store inside the confines of its Lost City of Atlantic City estate and from his own supply of fresh snails from slime, Poseidon calls for a new snail to keep his skin glowing.

The sneaky but incompetent Plankton (Mr. Lawrence) sees an opportunity to finally catch the secret Krabby Patty burger recipe from Mr. Krabs (Clancy Brown): He’ll lure SpongeBob away from the Krusty Krab restaurant, which he can. do by snail – take a nap, SpongeBob’s beloved snail, Gary. Is it the best plot (on behalf of Plankton or director Tim Hill’s film script)? No, but it does send SpongeBob and BFF Patrick (Bill Fagerbakke) out of Bikini Bottom and on the road to the lost city of Atlantic City to rescue Gary, driven there by the robot Otto (Awkwafina), an ever-inventive creation of Sandy the Squirrel (Carolyn Lawrence). In an inspired cast, Keanu Reeves — or at least his head — appears as the face of a wise brush named… Sage. who helps SpongeBob on his quest. Danny Trejo, Snoop Dogg and Tiffany Haddish (playing a fish named Tiffany Haddock, naturally) are all showing up too because, why not?

Hill’s film raises questions – “How is there a lake underwater?” “Why does Patrick eat snail litter” and “How is Sage always dry and fluffy in the ocean?” – although all logic is rightly forgotten in a sea of ​​silly jokes. This journey is filled with goofy fun, though it wanders enough to occasionally test the attention spans of those not young enough or high enough to be part of the film’s target audience.

“The SpongeBob Movie: Sponge on the Run”

Playing: Available March 4 in PVOD and streaming on Paramount+