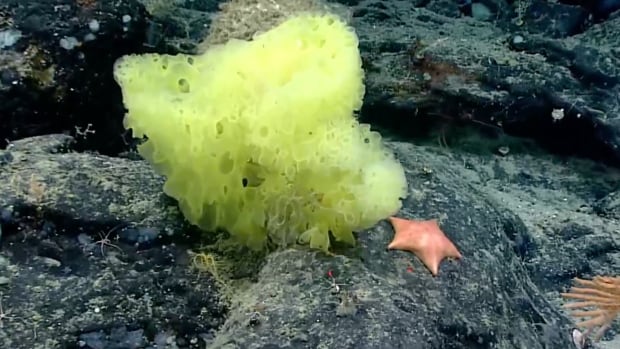 Read the transcript of the story

While observing a recent expedition to the Atlantic Ocean, Christopher Mah noticed a scene straight out of the popular cartoon Sponge Bob SquarePants: a bright yellow sea sponge, sitting next to a starfish that looked a lot like the main character’s best friend, Patrick.

But Mah, an associate researcher at the Smithsonian’s National Museum of Natural History in Washington, says a much more sinister scenario may have unfolded before his eyes.

â€œMost likely, what we saw there was the prelude to one of these animals about to devour the other,â€ he said. As it happens guest host Katie Simpson.

Starfish, Mah explained, “are predators of just about everything,” and pinkish stars Chondraster starfish sitting next to the Hertwigia the sea sponge in the picture was probably no exception.

For those who really WANT to see it? Here is Chondraster feeding on a sponge! (not the yellow “Spongebob” one though) from the#Okeanos North Atlantic canyon expedition in 2013 #realpatrick https://t.co/qmdzHV9q1E pic.twitter.com/xhqWA9k6ge

The image was captured by a National Oceanic and Atmospheric Administration (NOAA) underwater camera, aboard the Okeanos Explorer expedition ship. He was exploring the Retriever Seamount, an underwater mountain located in the North Atlantic Ocean.

As Mah explains, the area is incredibly cold and dark – so nothing like the pineapple in the shallow sea where the famous Nickelodeon cartoon was filmed.

Nonetheless, when he saw the sea creatures on the live camera feed, he immediately knew that others would make the same connection as him.

â€œThe colors are the things that warned me when I saw them and I just thought, hey, this will be worth a few tweets,â€ he said.

He was right, of course: his tweet drew thousands of retweets and over 12,000 likes. Some fans too edited the image to add the character smiles and other signature features.

Sponge Bob SquarePants debuted in 1999 on Nickelodeon and was created by marine science educator and animator Stephen Hillenburg. It grew into a monster franchise spanning 268 TV episodes, multiple movies, and a Broadway musical adaptation.

Mah says he’s been blown away by the largely positive response from SpongeBob SquarePants fans and others online. He thinks it may have been a small bright spot to share as the COVID-19 pandemic spreads.

â€œI was really just trying to get a few more people to look at these animals. But it really seems like he seems to have caught the attention of people, who really wanted to see something hopeful in nature. And I think so. that nature has always provided us with something like this, â€he said.

And while the Sponge and Starfish might not be busy trying to get a Krabby Patty burger just right, that’s no reason to dismiss how amazing nature is, Mah said.

The mere fact that the sponge has such a bright yellow color is unusual, he explained. Most seen at such depths are white. Another fact that may surprise you: they are in fact living creatures made of small fibers of glass.

â€œIt seems to be lost when you see something like, you know, the rectangular yellow sink sponge that SpongeBob is supposed to represent,â€ he said.

Mah doesn’t blame a show like SpongeBob SquarePants for its obvious lack of scientific precision, however. It is primarily an entertainment program for children, not a science documentary.

He saw the excitement that fans of the show brought to the photo as a potential moment of educational outreach.

Mah says he’s looking forward to the next one Suicide Squad DC Comics movie because it will also feature one of the most ridiculous depictions of marine life in pop culture.

â€œStarro isâ€¦ a 12 meter tall starfish monster. I love this stuff,â€ he said.

“It’s not a particularly good poster for starfish biology, but you know it’s okay. It makes the day a bit faster.”