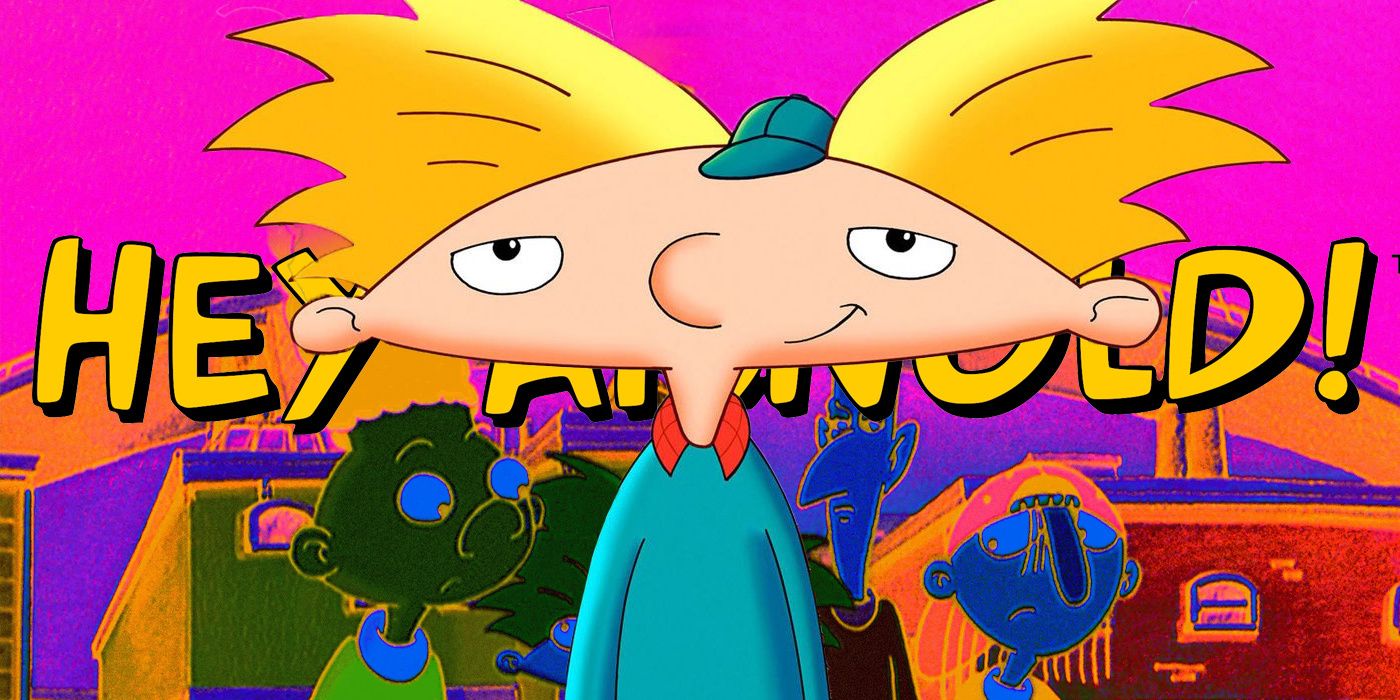 Episodes That Hit Us With Harsh Life Lessons

More than two decades have passed since the first episode of Hi Arnold! aired on Nickelodeon, but the beloved ’90s cartoon still holds up like it premiered yesterday. Created by Craig Bartlett, Hi Arnold! is one of those rare little shows that is still so good in itself and not just as a pure nostalgia trip. And, like almost all of our favorite shows that we watched religiously as kids, Hi Arnold! strikes differently in adulthood. Hi Arnold! may not be laden with unmistakable insinuations like some programs (seriously, how did I not think of the fact that Sponge Bob SquarePants takes place in a place that is literally called Bikini Bottom?), but instead conquered a much more difficult feat. Hi Arnold! was one of the few children’s shows that wasn’t shy about tackling difficult topics and doing so in a way that perfectly matched the overall tone of the show: always for kids, but thoughtful and sensitive to the issues children and adults have experienced, or will likely experience at some point in their lives, from shame and discomfort in their own skin, to feelings of being abandoned or neglected by the people who were meant to care for you and love you unconditionally. Here are some of the most profound moments of Hi Arnold! who taught us hard life lessons.

“Helga on the Couch”

When I think of Hi Arnold! episodes that have stuck with me over the years, the first episode I think of is “Helga on the Couch”. This episode serves as an origin story of sorts for Helga (Francesca Marie-Smith) love affair with Arnold (Toran Caudell). Between her life-size replica of Arnold made out of chewing gum and her penchant for sneaking around and hiding behind trash cans to watch Arnold from afar, Helga is essentially the 4th grade version of Joe Goldberg in the making. That being said, it’s easy to see why Helga loves Arnold so much: Arnold is the most compassionate and generous child there is. He also has a pretty sweet sense of style and an unreasonably cool bedroom for a 4th grader. But when Helga ends up in compulsory therapy at school in “Helga on the Couch,” we learn that Helga’s obsession with Arnold began as early as kindergarten when he was the only person to notice her. Helga’s life in kindergarten was no different than it is in her present life. Her parents completely neglected her because they were so busy looking after her “perfect” older sister Olga (Nika Futterman). And it’s pretty much canon at this point that their mother, Miriam (Kath Soucie), certainly does not put correct fruit in these smoothies. Arnold is the first person, most likely ever, to pay attention to Helga. Helga’s therapist helps her face this truth in “Helga on the Couch,” a surprisingly sensitive commentary on the importance of mental health.

Before Lila Sawyer (Ashley Buccille) became Arnold’s dream girl, she was a transfer student at PS 118. Unfortunately, the PS118 girls (led by, shocker, Helga), make it their mission to humiliate the always too beautiful Lila over their own jealousy and insecurity. After a few failed attempts, they succeed and play a cruel prank on Lila that ends with her being covered in a platter of spinach and rotten fish. After Lila walks out of the cafeteria in tears, Helga and the girls volunteer to bring her homework after school so they can bask in their victory more. They are surprised to see that “Mrs. Perfect” actually lives in a run-down apartment, and are even more surprised when they hear an overwhelming conversation between Lila and her father. Lila’s father is a widower and is raising Lila alone, and they struggle to make ends meet. Lila’s father receives a phone call from a potential employer with another job rejection, and Lila tries to comfort him while he bursts into tears because he ate their last can of beans. “Ms. Perfect” is so heartbreaking, even decades later, and it remains a tough reminder that you can never assume you know another person’s story.

Hi ArnoldThe first Christmas episode of “Arnold’s Christmas” is widely considered one of the best and most iconic episodes of Hi Arnold! When Arnold receives Mr. Hyunh (Baoan Coleman) for Secret Santa, he is completely perplexed on what to offer him. He wants to give Mr. Hyunh something meaningful and personal, so he visits him to try to find out more about what he likes. During Arnold’s visit, Mr. Hyunh tells him about his long-lost daughter Mai (Hiep Thi Le). There was a terrible war in his country that forced them to flee, but when there wasn’t enough room for the two of them in a helicopter out of town, Mr. Hyunh made the painful decision to hand over his little girl to a soldier on the helicopter to ensure her safety. As the helicopter departed, the soldier called out the name of the town he and Arnold currently live in. It took Mr. Hyunh 20 years before he could leave his country, but when he did, he came straight to the city in hope. to find May. Arnold is determined to find Mai and reunite father and daughter for Christmas. “Arnold’s Christmas” is an incredibly moving and important episode that gives voice to the Asian American community, whose experiences and stories are still, to this day, largely ignored or distorted in the media.

“Chocolate Boy” hits differently when you realize the entire episode is a shockingly dark commentary on the dangers of addiction. chocolate boy (Jordan Warcol) is ready to dance like a monkey for a bag of chocolate. He’s ready to dig in the dumpster for a candy bar. He’s willing to humble himself and degrade himself just for a scoop of malted milk. When Wolfgang (Toran Way) promises Chocolate Boy a ten-pound bag of chocolate if he can go without for two weeks, Chocolate Boy enlists Arnold’s help. During the two long weeks without chocolate, Chocolate Boy is shaky and restless and willing to do just about anything for a bite of chocolate. There is even a right Clockwork Orange when Arnold tries to brainwash Chocolate Boy’s chocolate addiction. In the end, Arnold gets to the root of Chocolate Boy’s addiction: he eats chocolate because he misses his beloved nanny, who gave it to him before she left him. Between Helga, Stoop Kid and Chocolate Boy, there is certainly a parcel abandonment issues deeply rooted in Hi Arnold!

RELATED: The Best “Hey Arnold!” The Halloween episode is not his Halloween special

“Weighing Harold” is about self-esteem. After Harold (justin shenkarow) eats 50 Mr. Fudgy Bars in exchange for a quarter, he surprises Sid (Sam Gifaldi) and Stink (Christopher Walberg) making cruel and hurtful comments about her weight. Harold is humiliated and ends up going on a weight loss cruise specifically for kids who need to lose weight. When he returns, his peers are shocked to find that he weighs even more than before he left. Harold is devastated, so he asks Arnold to help him get back to his original weight. When Harold feels completely defeated and tries to give up, Arnold reminds him of one of life’s most important lessons: it doesn’t matter what other people think of your appearance, that’s what you think.

“Pigeon Man” is a classic Hi Arnold! episode, right there with “Stoop Kid” and “Arnold’s Christmas”. When Arnold’s carrier pigeon falls ill, he brings it to the mysterious “Pigeon Man” (Vincent Schiavelli) to be cured. According to urban legend, the Pigeon Man is a half-man, half-bird who hides on the roof of a building on 88th Street keeping only the company of his birds. When Arnold reaches the roof with his injured pigeon, he finds not a creature of legend, but a lonely recluse named Vincent. Vincent tells Arnold that some people just aren’t meant to be around other people and that he prefers the company of his birds. When Arnold takes Vincent out for pizza to give him a brief reminder of the outside world, Harold, Stinky, and Joey (Michel Poissonman) sneak onto Vincent’s rooftop and trash the place. His pigeons fly away, but Vincent assures Arnold, who is shocked and upset by his classmates’ prank, that they will return. Still, the prank serves as a deeply sad confirmation to Vincent that people, more often than not, are a letdown. “Pigeon Man” stands as one of the saddest episodes of Hi Arnold!but fortunately, there is a positive point: Arnold taught Vincent that he are few good people in the world.

More than 20 years later, and “Stoop kid is afraid to leave his porch!” still lives rent-free in my mind. Along with “Pigeon Man,” “Stoop Kid” is a character-driven episode that gives a perfect 11-minute snapshot of what Hi Arnold! does the best: Arnold, the world’s most compassionate 9-year-old boy, helps someone believe in themselves. Legend has it that Stoop Kid (Danny Cooksey) was abandoned on his front steps as a baby and has never left since. Stoop Kid is a bully who harasses anyone who walks past his front step, but Arnold feels sorry for Stoop Kid when he realizes it’s fear which prevents him from leaving his steps. Arnold helps her face her fear and take her first brave step out of her front porch and into the real world. Assuming the legend that Stoop Kid was abandoned as a baby is true, it makes sense that Stoop Kid would have a phobia of leaving the only place he’s ever known. “Stoop Kid” is another example of Hi Arnold! episode that proves that each person has an untold story and, more often than not, struggles to deal with trauma, whether it’s abandonment, neglect, or loss.

From malaprop-spitting coaches to bowl cut-wearing lunatics, this is Football Head’s most colorful resident.

Rae Torres is a lead screenwriter of television and film features and a graduate student working on her M.Ed. When not in class, you can find her hanging out with her husband, stepson, and their three cats, Raisin, Gollum, and Smeagol. Interests include reading all of fantasy author Brandon Sanderson’s Cosmere-related content, watching anything and everything Jon Bernthal appears in, and aggressively defending Taylor Swift.