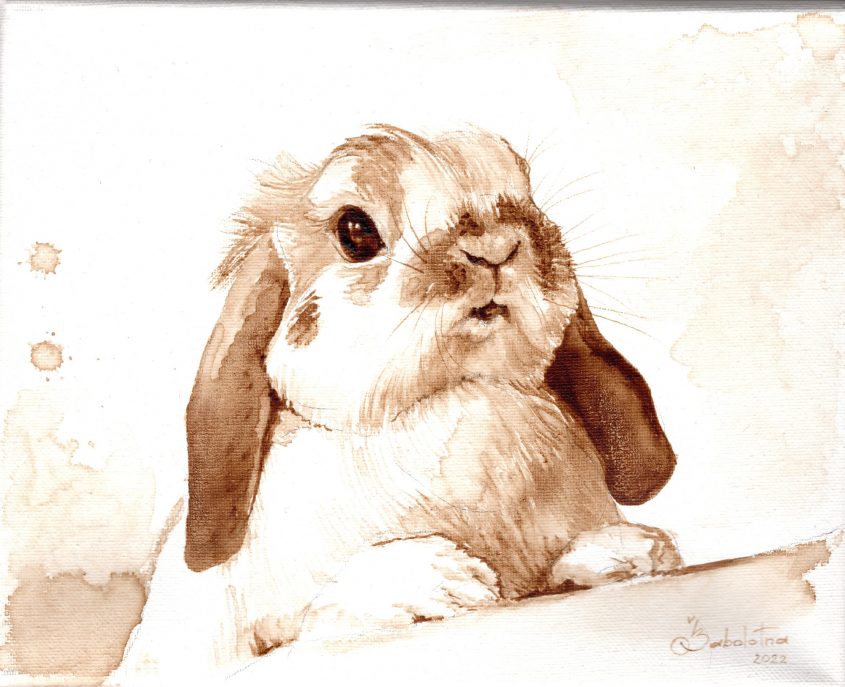 Artist Ballston Spa creates coffee-infused portraits, will be at Art in the Park – The Daily Gazette

The smell of brewed coffee signals the start of the day for most of us, but for Ballston Spa artist Ilona Zabolotna, the aroma is synonymous with her palette.

Using brewed espresso, Zabolotna creates effusive and sometimes intricately detailed paintings, all in the sepia hues one might see in their morning cup of coffee.

Born in Ukraine into a family of artists, Zabolotna began studying art at a young age and studied all the mediums she could, from watercolors to ceramics. She eventually earned her master’s degree in ceramics and subsequently exhibited her work throughout Ukraine.

However, when she moved to the United States in 2011, then to Ballston Spa in 2013, it was difficult for her to pursue her artistic career, in part because of the language barrier. At the time, she did not speak English and this prevented her from showing her work locally.

“You can’t ask because you don’t understand the answer. . . it just pushed me out,” Zabolotna said.

So for about six years she worked as a barista at Coffee Planet in Ballston Spa, making coffee and learning the language.

“I decided if I will be with people, even if I don’t want to speak, you still have to learn. You have to speak and that’s how you can learn English,” Zabolotna said.

There she was also able to exhibit some of her acrylic paintings and it was through this work that she started doing coffee art. In 2018, when former owner Cliff Baum decided to retire and sell the business, she wanted to give him a parting gift.

“He was very nice to me and I wanted to give him a present,” Zabolotna said. She painted a portrait of him using brewed coffee.
“When I saw the reaction, people were excited,” Zabolotna said.

She decided she was onto something and started experimenting with the medium. In the beginning, she used more of a watercolor technique with the brewed coffee. To create richer, darker hues, she tried drying coffee and baking it. More recently, she has used brewed espresso, which she dries and cooks, to create her paint palette.

“I just tried to find my own way and my own style,” Zabolotna said.

Since that first portrait, her coffee art has been emulated and she is often busy with commissions, painting portraits of people and their pets.

Zabolotna also gives classes and workshops locally, including at The Blooming Artist in Clifton Park.

In her spare time, she also creates works for regional display, capturing everything from moody cityscapes to the majestic nature of horses.

On Saturday, she will have her work set up at Art in the Park, an event hosted by Saratoga Arts in Congress Park. It brings together artists from across the region working in a variety of mediums, from photography to painting to sculpture.

“I am really delighted with the diversity of our musical line-up. We’ll have sitar in the morning, then we’ll have a bluegrass band at noon, and then Mark and Jill will sing blues,” said organizer Olivia Walton, Membership and Development Coordinator at Saratoga Arts.

There will be community booths from local arts and equestrian organizations. The event is presented in partnership with the Thoroughbred Retirement Foundation, which works to save former racehorses from neglect and slaughter.

“I think partnering with the Thoroughbred Retirement Foundation, aside from being an awesome non-profit organization, touches a different crowd of people . . . who otherwise wouldn’t attend a fair of art in the park,” Walton said.

For Zabolotna, who has participated in Art in the Park before, it’s a way to get involved in the artistic community and a welcome opportunity to showcase her work.

“I [had a rich] artistic life in Ukraine. So now I just want it back [to that]said Zabolotna.

She has not visited her homeland for about a decade. His family, including his mother and brother, still live in the Donetsk Oblast region, which has been under Russian occupation since 2014, Zabolotna said. Watching the invasion further into Ukraine has been unsettling.
“[I’m] so much more worried about it. You can’t change, you can’t help. You cannot remove them from the place,” Zabolotna said.

Working on commissions and giving lessons has at least occupied his mind and his hands. She has also recently started working more in ceramics at The Blooming Artist, which has been rewarding.

“I love clay. I love coffee and I love paintings,” Zabolotna said. “The more you learn and the more you know, the more interested you are. [in other mediums] it’s like my brain is always working in a few directions.

To learn more about Zabolotna’s work and classes, visit art-by-ilona.com.

art in the park

More from The Daily Gazette:

Categories: Art, On the track, Arts and life