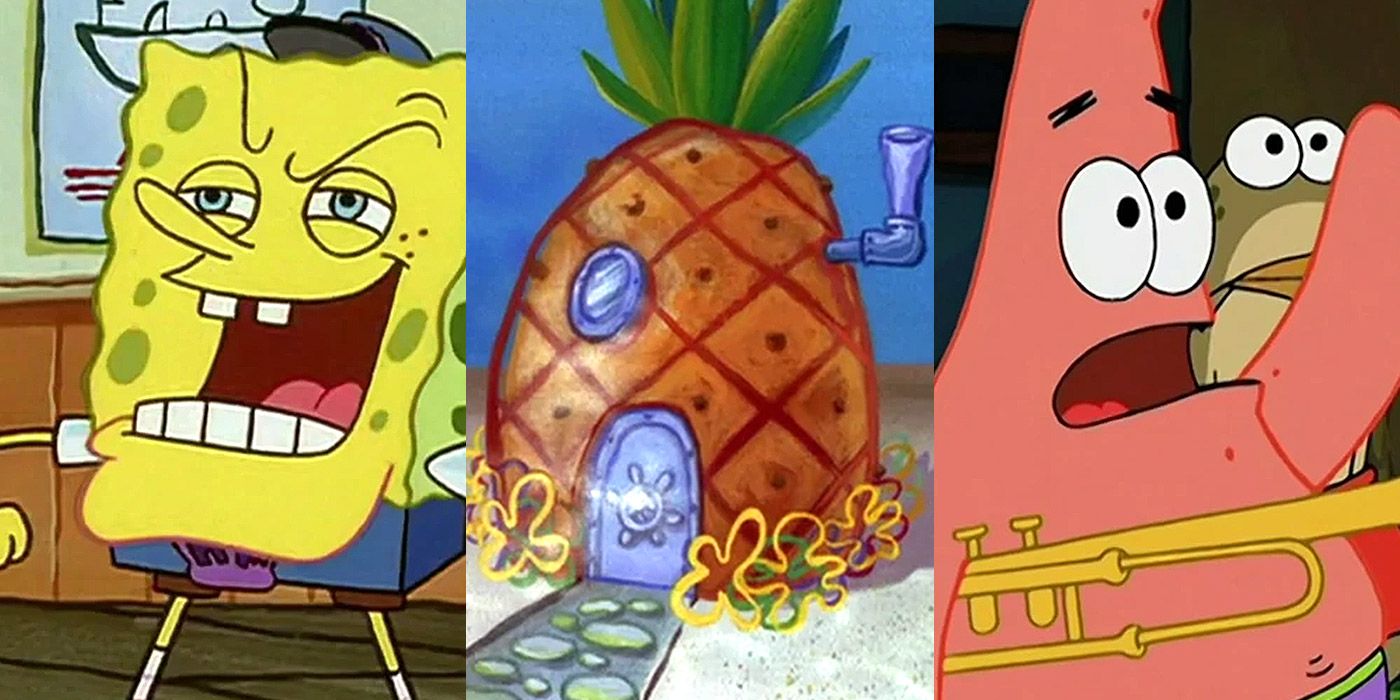 SpongeBob SquarePants has been making both kids and audiences laugh for years now, thanks to its offbeat brand of slapstick humor and slick writing. It’s hard to find an episode that doesn’t bring the laughs, but certain ones stand above the rest as the absolute funniest, and it remains to be seen if future seasons will be able to top them.

These are the episodes that have stood the test of time as some of the wackiest, most outrageous, and laugh-till-it-hurts romps in the entire series. They’re worth checking out for fans who haven’t seen the earlier seasons, or for those who need a hilarious trip down Bikini Bottom memory lane.

Updated on August 23rd, 2021 by Derek Draven: The long-running SpongeBob Squarepants has enough funny episodes in its roster to keep fans going for days, and there’s no shortage of laughs to be had. This list has been updated to showcase a few more wacky and outrageous episodes featuring everyone’s favorite irresponsible sponge and friends. A large bulk of episodes really made their mark in the first two seasons, paving the way for everything that would follow later. If it weren’t for the enormous bursts of unhinged creativity and laugh-out-loud comedy from the minds of the writers, SpongeBob may never have solidified himself as a children’s pop culture icon.

The first episode of the series ranks as one of the funniest and deserves special mention for getting the ball rolling between the classic SpongeBob/Mr. Krabs duo. SpongeBob heads into the Krusty Krab to ask for a job as a fry cook, but Squidward and Mr. Krabs send him on an impossible errand to try and throw him off course.

Not only does SpongeBob complete the task, but he also sets about impressing Mr. Krabs and scoring his now-famous position as Krabby Patty cook. Audiences who grew up with Ren & Stimpy felt right at home with the madcap comedy, but for newcomers and kids alike, this was a whole new level of fun.

One of the silliest and most hilarious episodes is undoubtedly this season 3 gem, focusing on SpongeBob and Patrick having a campout. Squidward decides to join in on the fun but becomes annoyed when he discovers that the duo are camping out only a few feet from SpongeBob’s house.

Nevertheless, they continue on through the night in a series of madcap goofs around the campfire, until a menacing Sea Bear shows up. After some quick thinking, the trio is able to quell the threat, which in turn leaves Squidward staring down the nose of a Sea Rhinoceros, for absolutely no good reason other than confused laughter.

When Mr. Krabs becomes too invested in a board game, he decides to try turning it into a treasure hunt, recruiting SpongeBob and Patrick to find a real-life treasure. The episode is notoriously funny for its overuse of the word “arrgh,” which Patrick badly mispronounces.

Later, Patrick leads the treasure-seekers east when they were supposed to be going west, all due to a hilarious mispronunciation. The episode is especially funny for portraying Mr. Krabs as his regular greedy self, only amplified many times over for the sake of finding the treasure.

A routine pizza delivery turns into a hilarious nightmare scenario when Mr. Krabs tasks SpongeBob and Squidward to do the deed. It’s one of the first examples of the zaniness that takes place when SpongeBob is allowed to get behind the wheel of a car, which would later become a recurring gag on the show.

When SpongeBob begins using the ways of the pioneers to locate the way back to town, he ends up dancing like a fool while a hungry Squidward makes a go for the pizza. It’s one blunder after another until the two finally make their way to their delivery destination, where Squidward throws the pizza in SpongeBob’s face out of sheer frustration.

Greedy as ever, Mr. Krabs decides to keep the Krusty Krab open to take advantage of late-night business. SpongeBob is overjoyed at the thought of working literally forever, while Squidward is less than enthused. To put a damper on SpongeBob’s excitement, Squidward takes advantage of his fear of the dark in some creative ways.

He tells SpongeBob a story of a fry cook who once severed his own hand, and replaced it with a rusty spatula, instead. It’s a great plan until both SpongeBob and Squidward start to think the infamous killer might be real. The episode is hilarious for an end shot showing Count Orlok from the classic vampire film Nosferatu flicking the lights on and off.

After SpongeBob receives a magazine depicting the luxurious lifestyles of the wealthy, he and Patrick go door-to-door selling chocolate. From the beginning, it’s a mess as customers go wild for the product, and the friends get conned by another salesman. Eventually, they try to change tactics to get ahead.

RELATED: 10 Great Cartoons From The ’80s You Totally Forgot About

Hours after jumping through hoops, an eccentric customer finally catches up with them and offers to buy all their chocolate, making them a fortune in the process. One of the highlights of the episode occurs at the end, when SpongeBob and Patrick take Mary and her mother out on an expensive (and twisted) double date.

This episode is particularly funny for its reverse-logic theme involving SpongeBob and Patrick buying a TV, simply for the box. Squidward takes the TV, but when he hears all the fun SpongeBob and Patrick are having in the box, he’s stricken with a terrible case of curiosity and a need to investigate.

It’s a hilarious look into the mind of SpongeBob Squarepants‘ tragically sympathetic Squidward, a guy with no sense of humor and even less of an imagination. When he tries to follow suit and use that imagination to have fun, he ends up in the middle of a landfill with nothing to show for it.

This episode centers on SpongeBob getting stuck in a particularly scary part of the sea known as Rock Bottom, known for its inherent darkness and weird assortment of creatures. He tries to hop on a bus back to Bikini Bottom, but the fates are against him at every turn, leaving him alone in the dark.

Getting home involves receiving some help from an odd anglerfish who seems to blow raspberries for no discernible reason. But, the anglerfish uses SpongeBob’s glove balloon to get him home. It’s weird and bizarre, and definitely one of the oddest and funniest episodes of the show.

SpongeBob and Patrick end up angering the laws of nature itself when they rouse Sandy from her winter hibernation. This ends up creating one of the most hilarious moments between SpongeBob and Sandy, showing a glimpse of her that audiences had never seen up to that point.

After their loud antics cause Sandy to wake up in a rage, Patrick crafts a crude pair of earmuffs for her, made out of his belly button lint. The madness doesn’t stop as SpongeBob and Patrick frolic in this new winter wonderland, at least until a series of unfortunate events forces them to pull all of Sandy’s fur off in order to stay warm.

When SpongeBob and Patrick come across a “magic” pencil that brings their drawings to life, SpongeBob decides to draw himself for the sake of a prank. He ends up creating a double named DoodleBob, who turns out to be a deranged evil copy who wants SpongeBob out of the picture â€” permanently.

SpongeBob mistakenly thinks he used the eraser of the pencil to get rid of DoodleBob, which is where the show pulls a fast one on the viewer. DoodleBob’s arm survives, and it uses the pencil to redraw himself before going after SpongeBob. The battle ends in a particularly poetic fashion, closing the book on this quirky episode.

Squidward ends up being on the receiving end of the flak once more in this funny episode. Bikini Bottom is deluged with snowfall and it’s an excuse for him to instigate a snowball fight between SpongeBob and Patrick. However, when the two sign a peace treaty, Squidward becomes enraged and tries to instigate hostilities again.

The episode gets especially funny when Squidward gets in on the action, building himself a massive fort out of sheer paranoia. It’s a rare display of Squidward actually enjoying himself, at least until his neurotic personality ends up getting the best of him, ruining the entire experience.

In order to show up rival classmate Squilliam Fancyson, Squidward slaps together a band to play at the highly prestigious Bubble Bowl event. It’s all a ruse to get Squidward to embarrass himself, but he’s nevertheless determined to make a go of it and turn the event into a success.

Unfortunately, he gathers up the worst of the worst, including Patrick, Sandy, and the tragic sympathetic villain Plankton, none of whom can hold a tune. After a series of knee-slapping, hilarious blunders and errors, SpongeBob steps in as composer to try and turn them around. It ends on a rare high note for Squidward, making the episode just as heartwarming as it is ridiculous.

Irony strikes when SpongeBob is given Hall Monitor duties by a reluctant Mrs. Puff, only for the uniform to go straight to his head. After boring the entire school with a day-long speech, SpongeBob is allowed to keep the uniform on until the next day, which ends up causing him to go over his skis.

SpongeBob declares himself Hall Monitor of the entire city, and his actions create complete and utter chaos in the streets. It’s one laugh after another as the police begin a manhunt for SpongeBob, who doesn’t realize that he’s the culprit. The episode ends in eye-watering fashion when Mrs. Puff ends up in jail over the entire thing.

Upset over an anchor that has struck his house, Squidward decides to give the shipowner a piece of his mind, with SpongeBob and Patrick in tow. What follows is one of the funniest episodes of the entire series. Squidward gets thrown into the “Fly of Despair,” while Patrick and SpongeBob become a part of the Flying Dutchman’s crew for all eternity. Unfortunately, they’re rotten at their jobs.

They fail to try and escape until they snatch the Dutchman’s dining sock, which causes him to agree to grant them three wishes. The episode ended with three possible, equally oddball endings, which was unusual for the show, and definitely made for some fun chatter among the SpongeBob fan community.

One of the funniest running gags of SpongeBob Squarepants began with this classic episode way back in season 2. SpongeBob is out to get his boating exam, which tends to end in disaster whenever he gets behind the wheel. A traumatized Mrs. Puff would rather not deal with the hassle of trying to help a lost cause, so she essentially walks him through to a passing grade.

The funniest part of the episode occurs when Mrs. Puff begins regretting her decision and has nightmares about SpongeBob on the road. The episode is both shocking and hilarious for depicting SpongeBob crashing into things and running people over, prompting her to devise a desperate scheme to keep him off the road.

NEXT: 10 Characters Who Deserve To Be SpongeBob Squarepants’ Third Neighbor

Next
Gilmore Girls: 10 Of The Nicest Things Logan Ever Did

A Seattle native, Kacie has loved entertainment in the forms of books, films, television and music since day one. Inspired by a filmmaker relative, Kacie has been pursuing a career in the film and television industry in Los Angeles ever since. A graduate of The University of Arizona, Kacie has written for her college newspaper The Daily Wildcat, Harness Magazine, 25YL, and now has added Screen Rant to her resume. She loves writing and all things pop culture.