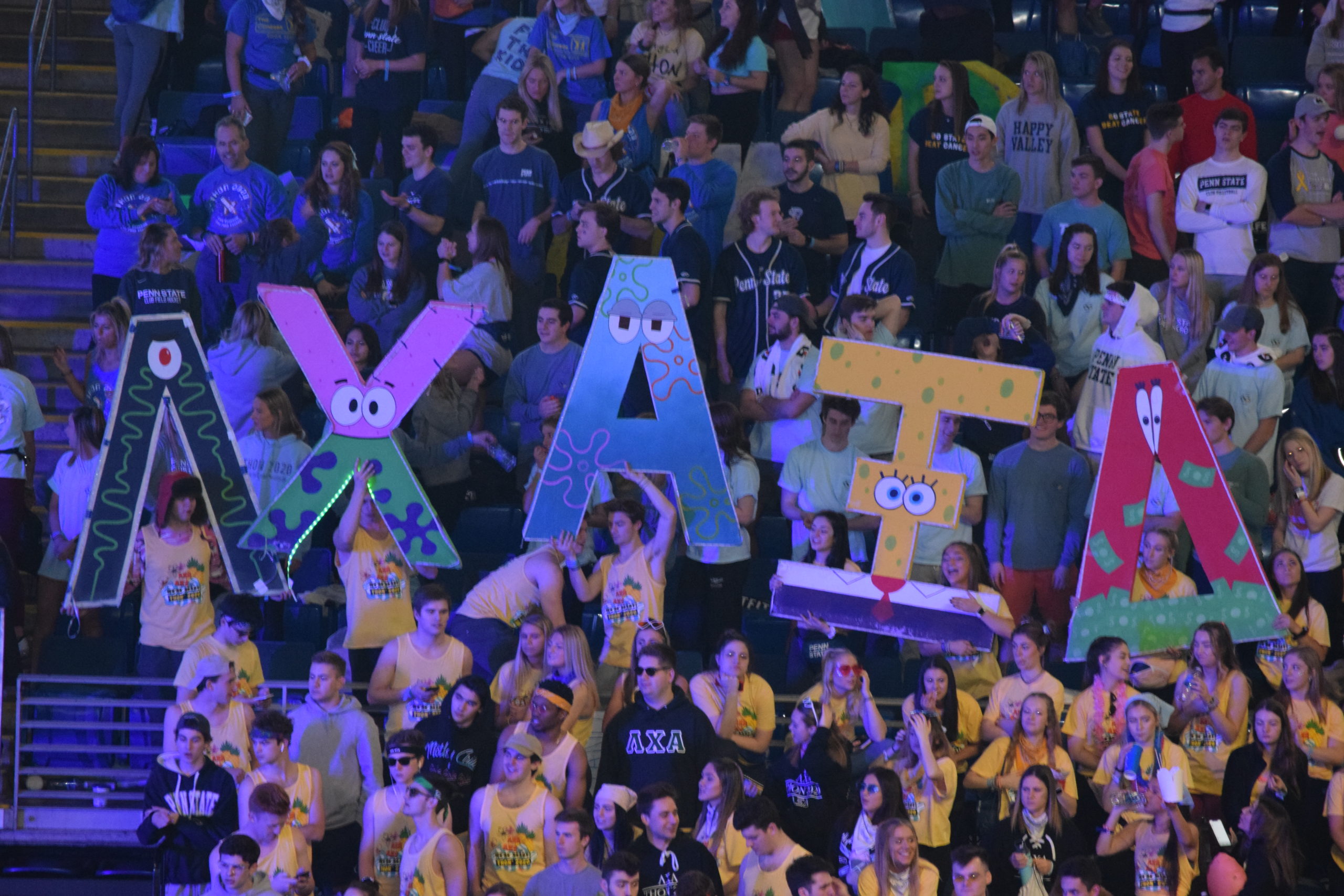 Each TUNA, the orgs decorate on a certain theme. This year, the Lambda Chi Alpha fraternity and the Xi Delta sorority found their theme in a pineapple under the sea.

Allie Monaco, a psychology graduate and Xi Delta member who designed and painted the letters, sat down with us to discuss what made them possible.

OS: Why did you choose to paint the letters in a SpongeBob SquarePants theme?

AM: We chose SpongeBob as the theme because our child THON asked us to do so. She loves it and we wanted to do something that she could really get involved in and enjoy.

OS: Did you consider other themes before choosing SpongeBob SquarePants?

AM: We didn’t think of anything else. We always planned to ask her what she wanted to do. The second she said SpongeBob SquarePants, we jumped at the idea.

OS: How long did the whole letter creation process take?

AM: The whole process took about three weeks to a month. We had to do all the new letters because we are a new couple. We had to go buy the foam, trace the letters and cut them out. The Lambda boys have helped me a lot in this process. Painting them took about two and a half weeks, painting them pretty much whenever I could after work or class.

OS: Did you go through the whole process on your own?

AM: My position really encompassed what our section would look like, so I told everyone I would take care of that and paint them myself. I had help along the way, my other chairs helped me, especially with the banner. One of my roommates helped me lay out the basic colors, so it wasn’t just me alone.

AM: I have always been interested in art. I was interested when I was a kid and in high school. When I got to college I was very busy, so THON has always been my one time a year where I can really get back to art and start painting again.

OS: If you had an extra letter to paint, which character would you paint?

AM: It’s difficult. I wanted to do Sandy but I had a hard time figuring out how I could put it on a letter. If I had more time and an extra letter, I would probably see what I could do with it.

AM: I think my favorite was SpongeBob SquarePants just because of the looks, it’s so recognizable. My favorite to paint was Mr. Krabs because figuring out how to get the money to go out was a lot of fun.

OS: Will you paint more letters in the years to come?

AM: I’m actually an elderly person, so I won’t be painting any more letters. I really wish I could do that, though.

OS: What do you plan to do with the letters after THON ends?

AM: Traditionally we just keep them in one room until next year’s TUNA, but they’ve taken a bit of wear this year so I’m not sure if we’re going to be able to reuse them.

OS: According to Onward State lore, if you could be a dinosaur, which one would you be and why?

AM: Wow, another tough one. Probably a velociraptor so I can get everywhere as fast as possible!

Jim is a first year student specializing in broadcast journalism. Add him to the list of everyone who lives “just outside of Philly”. The fourth to name, and the best one to ever do, Jim is a writer for Onward State. In his free time, you can find him in his bedroom, avoiding the gym at all costs or going to as many tailgates as possible. If you care enough about following him on Instagram, you can find him @ James4Ciminelli or on Twitter @ciminelli_jimmy.