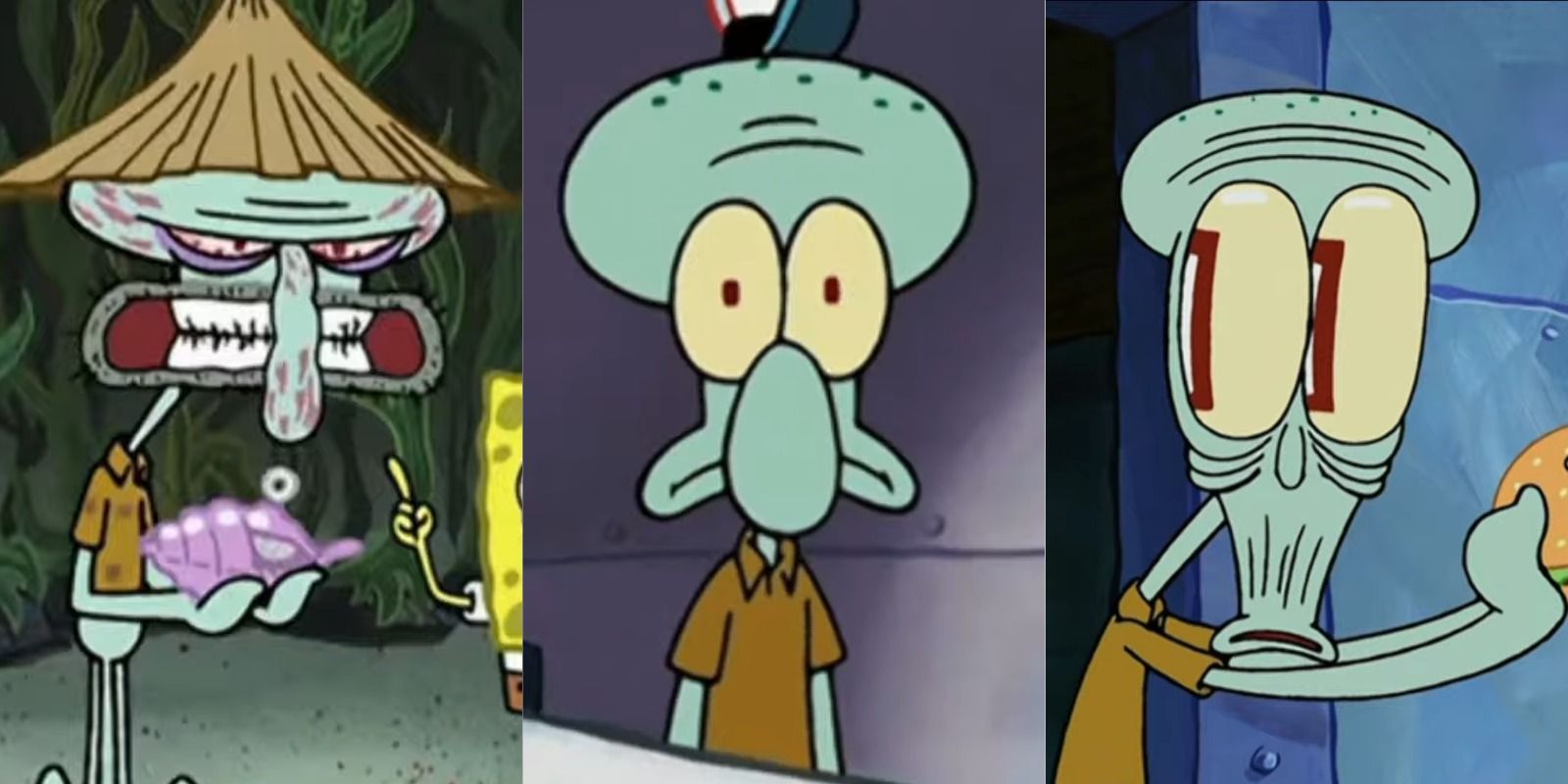 As a kid, everyone considered Squidward, SpongeBob’s cranky neighbor, the show’s jerk. But from the perspective of an adult revisiting Sponge Bob SquarePants, Squidward becomes the most relevant and funniest character in the series.

RELATED: 15 Quotes From Squidward We Can All Relate To

This ultimately means that the episodes featuring Squidward Tentacles are some of the funniest and most beloved episodes of all time. In which episodes did Squidward shine the most? When did Squidward take a lead role or when was the story told primarily from his perspective?

Over the following seasons, fans often criticize Squidward for being treated too badly, especially in episodes where he doesn’t hurt anyone. “Krusty Towers” is one of the few episodes where Squidward gets revenge, and rightly so.

Mr. Krabs turns the Krusty Krab into a hotel whose motto is, “We will never turn down a guest, even the most ridiculous request.” When Patrick checks in, Squidward is treated horribly by him and by Krabs, prompting him to quit and become a guest himself in order to make Mr. Krabs’ job miserable. The ensuing hijinks are not only fun, but quite satisfying.

Trying to avoid SpongeBob SquarePants and Patrick, Squidward hides in the Krusty Krab freezer but ends up being frozen for 2,000 years. Upon awakening in the distant future, Squidward embarks on a journey through time and space in a time travel box similar to the TARDIS in Doctor Who.

The concept alone is fun, but it gets even more fun because Squidward can’t go between the present, the distant future, and the prehistoric age without encountering a variation of SpongeBob and Patrick.

8 The return of Squilliam

Squidward’s former rival Squilliam Fancyson returns and Squidward lets his pride take over, claiming to own a 5-star restaurant. Of course, that’s a lie, so Squidward is working with Krabs and SpongeBob to turn the Krusty Krab into an upscale dining establishment.

From Mr. Krabs being a terrible cook to SpongeBob SquarePants having an identity crisis, anything that can go wrong goes wrong for Squidward. This episode generated several memes with famous lines like “Oh no! It’s hot!” and Mr. Krabs playing the smallest violin in the world which perfectly showcases this Sponge Bob SquarePants is a cartoon intended for children and adults.

Some of the funniest episodes of Sponge Bob SquarePants are the ones who feel like writers just throw random jokes at the wall and see what’s left. â€œThe Camping Episodeâ€ is a main episode with some unexpected jokes popping up throughout.

RELATED: 10 Squidward Memes That Make Us Cry With Laughter

Squidward discovers SpongeBob and Patrick camping out in the front yard and quickly gives in to peer pressure. Joining them outside for the night all kinds of shenanigans happen that don’t make any sense but always ends up being enough to make someone laugh; these include a famous musical number and an encounter with a sea bear.

To earn more money, Mr. Krabs decides to make the Krusty Krab open 24/7 and so SpongeBob and Squidward are forced to work nights. For fun, Squidward makes up the story of a ghostly cook known as the Hash Slinging Slasher who haunts the Krusty Krab. Suddenly, it seems like Squidward’s story is coming true.

Horror movie fans will probably appreciate this, one of the many scary movies Spongebob episodes, as it pays homage to and parodies every supernatural slasher villain with the Hash Slinging Slasher. Anyone who has actually worked nights will have extra laughs, knowing how slow it can be, but also worrying due to the lack of people.

After Squidward tries to join SpongeBob SquarePants and Patrick’s club out of spite, the trio find themselves stranded in the middle of a dead end kelp forest. SpongeBob and Patrick depend on a toy shell for their survival, causing hilarity as Squidward slowly evolves over time.

This episode even ends with a twist that everyone should see for themselves. “Club SpongeBob” is a parody of survival films in the same vein as Grey Where Castaway. Where Squidward constantly struggles for survival, SpongeBob SquarePants and Patrick are always given everything they need thanks to a miracle.

4 Die for the pie

Right from the start, Squidward makes hilarious remarks and comments that suit any minimum wage worker. However, SpongeBob gives him a gift that Squidward has to repay, so he lazily buys a pie from some pirates; said pie turns out to be a bomb. Squidward and Mr. Krabs find out too late, so he decides to give SpongeBob SquarePants the happiest day before the bomb goes off.

RELATED: The Best Friendship Moments Between SpongeBob And Squidward

The concept is both morbid but also endearing, showing that Squidward may be cranky towards SpongeBob SquarePants but that they are truly friends. Sure, SpongeBob does squidward through a lot of humiliating and hilarious activities, but Squidward turns out to be a good friend in the end. This episode is another one that ends with a humorous touch.

Squidward and SpongeBob are forced to deliver Krusty Krab’s very first pizza to a customer. After an incident with their boat, the two must travel for miles to get back to Bikini Bottom and deliver the pizza. Like any road trip comedy, things go wrong in a humorous way. â€œPizza Deliveryâ€ is another source of several memes seen on the Internet.

It turns out that Squidward not only hates Krabby Patties, but has never tried one. So SpongeBob pestered Squidward until he took a single bite. He’s convinced SpongeBob SquarePants that he still hates them, but by the time SpongeBob is away, Squidward becomes madly obsessed with the sandwich.

Much like in â€œClub SpongeBob,â€ Squidward gets more and more frantic as he tries to get over Krabby Patties without telling SpongeBob the truth. The animators go out of their way to create twisted and warped faces for Squidward and the things he goes through. Even SpongeBob SquarePants make a face that’s one of the most famous memes inspired by the show.

Squilliam’s debut challenges him to challenge Squidward and his non-existent marching band to perform for the Bubble Bowl. So Squidward brings together the many eccentric characters from Bikini Bottom to form the group and learn how to perform before Bubble Bowl day that leads to disaster.

It’s definitely a fun episode, with plenty of classic jokes including Patrick asking if mayonnaise is an instrument. Where “Band Geeks” shines is its climax where the band performs the song “Sweet Victory” and helps Squidward finally beat Squilliam. The song became a defining moment in the series, and Squidward’s victory is definitely sweet.

Melody MacReady is a writer and trans woman (she / she), passionate about everything pop culture. From movies and shows to games and comics, there’s not much she doesn’t enjoy or appreciate. Melody is also an aspiring screenwriter and director as well as a voice actress as a hobby. This spark for content creation came from her childhood, growing up with media of all kinds that inspired her to write short stories, write comics and start writing about them on the internet. Melody’s biggest inspiration came from her first vision of Zack Snyder’s Watchmen in 2009; the film combined with her knowledge of how scenes were performed via behind-the-scenes featurettes before the film’s release made her fall in love with the cinema. Not only does she write for ScreenRant, The Gamer, Comic Book Resources, and GameRant, but she maintains her own personal blog, discussing many topics related to pop culture.